Please note that at 5:00pm today, March 19th, all public and private beaches in Gulf Shores will be closed.  Alabama Governor Kay Ivey announced this afternoon that she has decided to close all Alabama beaches in an effort to protect the safety and welfare of the general public from the corona virus pandemic.  San Carlos will continue in our efforts to sanitize the property and assist all Owners/Guests with this new information and the impact thereof.  Please contact me directly if you have any questions or concerns.

ORDER OF THE STATE 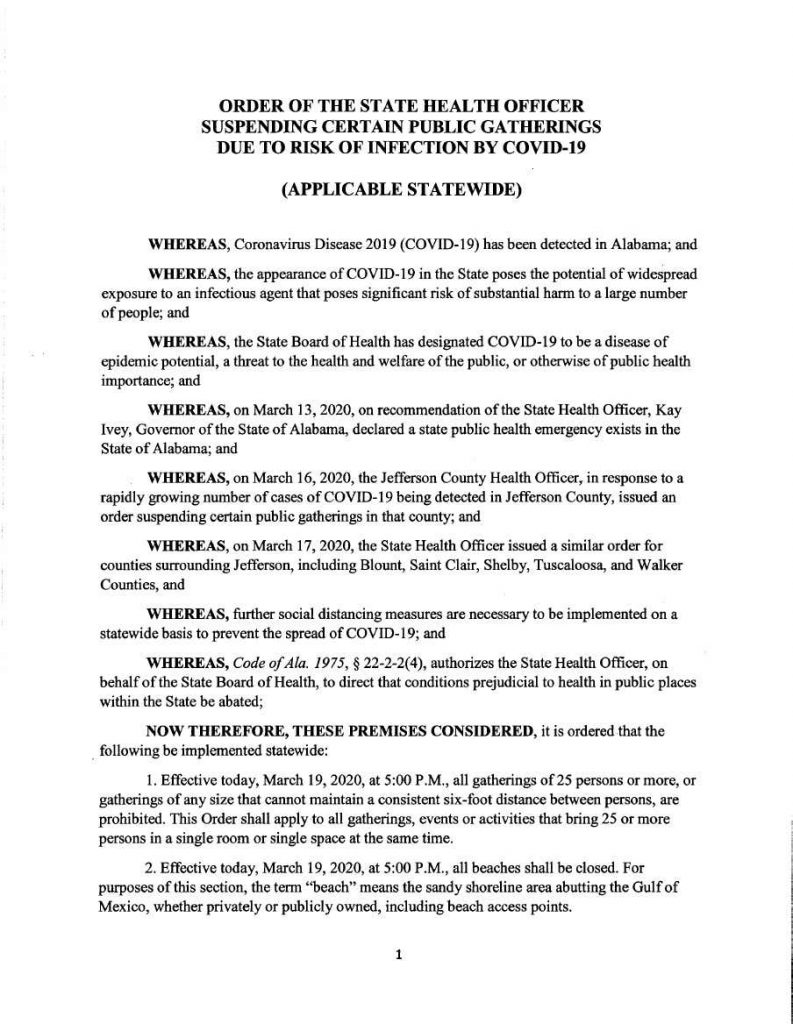 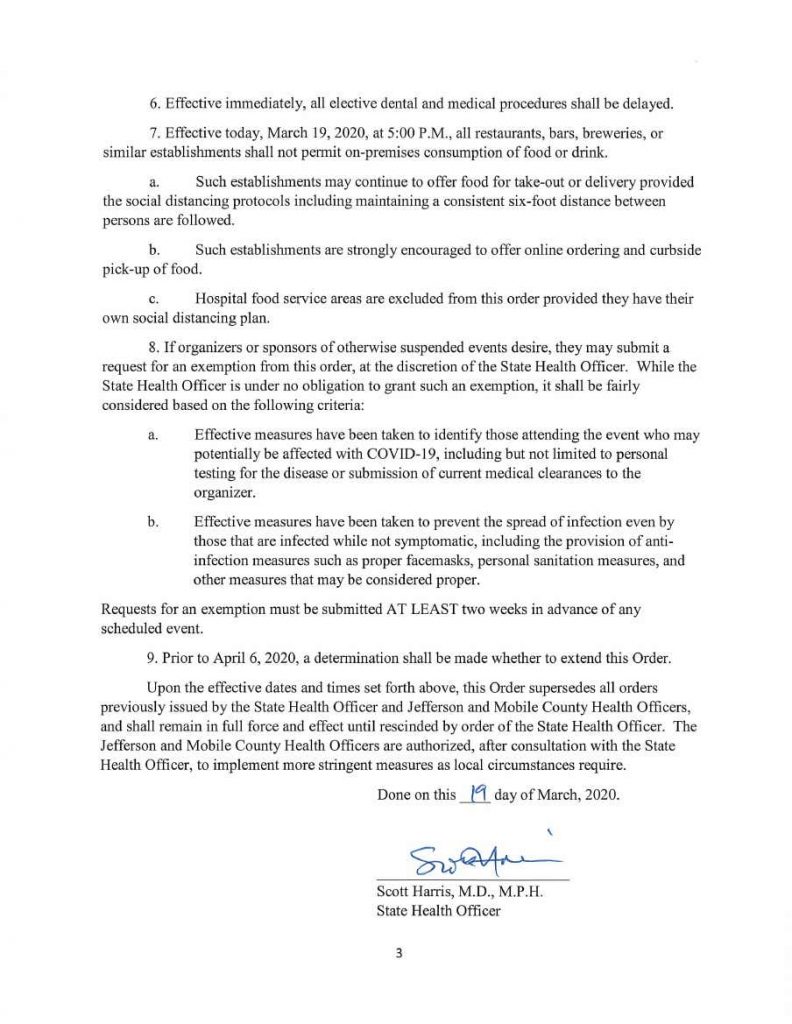 Alabama Gov. Kay Ivey has announced she is closing the state’s public beaches, both public and private, as of 5 p.m. today because of the coronavirus pandemic.  The term “beach” means the sandy shoreline area abutting the Gulf of Mexico, whether privately or publicly owned, including beach access points.  The order also addressed further restriction on gatherings and restaurant and bar operations.  “Despite our best efforts, the threat of the Covid-19 virus continues to spread and, unfortunately, we have not yet reached peak impact,” Ivey said in a prepared statement Thursday afternoon along with the state health officer. “The decision to place regulations upon Alabamians living in Jefferson County and its surrounding counties was an effort to contain the area in which the virus has been prevalent in our state.”

“As of this morning, 68 individuals have tested positive for the Coronavirus in Alabama. While I am pleased that many of our citizens are self-regulating and are practicing social distancing, we want to ensure that Alabama is doing our part to flatten the curve,” Ivey stated.

“Closing Alabama beaches is not a simple decision but one that I came to with the consultation of our elected officials along the coast and members of my administration. After many rounds of conversations with local leaders, in which we discussed several options, I have decided to close beach access in any form. Since we do not want to promote social gatherings, keeping the beaches open sends the wrong message to the public. At this moment, the safety and wellbeing of Alabamians is paramount.

“In addition, we rely heavily upon our first responders and critical healthcare workers to help those who are ill, as well as essential state government employees to keep the continuity of government, and many of them struggle with dependent childcare if daycares close. As a result, I have asked the Alabama Department of Human Resources and the Alabama Department of Public Health to explore emergency rulemaking to make critical exemptions to allow for daycare to be provided for these areas of crucial personnel.

“My administration – and all the services of state government – are going to be as flexible as humanly possible to help make your government work for you during the coming days and weeks. I want to the thank the people of our great state for their continued patience and for taking great care of themselves and each other during this pandemic.”

State Health Officer Dr. Scott Harris said “We understand that the health orders issued will be a hardship on Alabamians. We must, first and foremost, protect the health and safety of our citizens. This decision has not been made lightly and will help to prevent the spread of this virus.”

Gulf Shores Mayor Robert Craft had already ordered the city’s public beaches closed at 7 a.m. on Friday. The Baldwin County Commission, during a meeting Thursday morning in Robertsdale, voted to close the public access points to the beaches in the county’s unincorporated areas. That includes mostly access points to the beaches in unincorporated Fort Morgan.

A smoking area is on the east side outside the 1st floor parking garage.